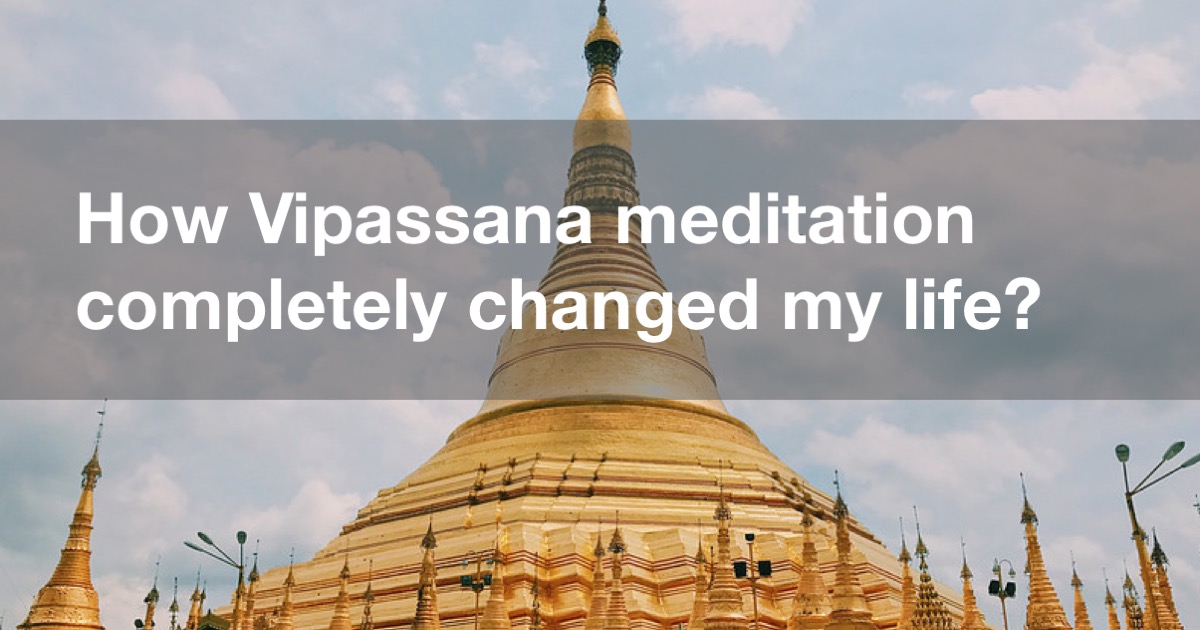 It’s been exactly a month since I finished my first Vipassana course in Yangon, at the Vipassana Joti Center. It was absolutely life changing. It opened a new door for me, to see many things differently, and to realize many things I’d never even thought of before. Practically, it also cured my insomnia. I tried many meditation methods before; now I will practice Vipassana for life.

I was out a lot last year, and I‘d socially indulge in drinking and smoking. I was working in finance at the time, and most of the time I could not keep up with the work if I don’t go out. It’s a mental thing. Now I completely stopped drinking and smoking. I start to go to sleep early, mostly before 11pm. I wake up early, too, naturally, without an alarm clock. I  try to minimalize my social time, naturally too, while last year I’d go to several events in a day, every day. Now I meditate every day. I eat simple, more vegetables than meat, not craving for fancy menus. I am totally changed, and I feel much better. I begin to notice many subtle things that I would never see before. I slowly realize answers to many of my doubts.

Weirdly now I can’t imagine the life before Vipassana. Was that me? I tried too much to be someone else unconsciously, and most people are like that because of social norms. I forgot who I was. Yesterday I saw a selfie from last year: my skin looks redish and allergic, and like the surface of the moon, looking older than how I usually look like. I was hype but not in a healthy state. I can’t tell how grateful I am now to have finished my first Vipassana course.

I heard about S.N. Goenka and his Vipassana centers years ago, but I never had a chance to go. It requires applying months in advance, and it’s difficult for a spontaneous traveler. I am lucky that I did it this year. Because I was in a good state – I wasn’t looking for anything, not trying to solve any problems in life, not having any crisis – friends asked me if I was having a hard time in life that I was going to a long retreat. I just happened to be free after quiting my job. It proved better this way. I naturally stopped drinking before the retreat. I was excited. I had never done any retreat before, though I had meditated only occassionally, and read a lot about it.

I actually have learned many different meditation techniques before. Repeating mantras. Meditating in sleep and dreams. Visualizing an image or an phenomenon. Observing thoughts. Now I focus on Vipassana, though I am open to try different methods at times. Vipassana is such a pure and straight forward method. I had many interesting experiences during the 10-day retreat (12 days in total). I am refreshed and reborn.

In the beginning, I could not even sit for five minutes. My back and legs were in great sore. I had to move every couple minutes. But on the last day, I could sit for two hours without moving. Determinations, as the teacher taught us, led me through and strengthened me. There are five commandments we have to follow. In addition, we were not allowed to talk, read or write, no internet, no phone, no computer.

Some people left in the middle, but most finished the course. As Goenkaji said, Vipassana is like a surgery, except it’s for our mind. Like a real surgery, you cannot leave the operating room in the middle. And afterwards, you will only get better. It’s true. I really wanted to leave the first couple days. It was pain every day. I was mourning the time I “wasted” on meditation, I could’ve done so many real things! I was fighting with myself. Deep inside, I know that I would stay and complete the mind “surgery”.

By coincidence, I was reading Yuval Noah Harari’s bestseller book Homo Deus: A Brief History of Tomorrow, on my flights to Yangon. On the dedication page, he writes, “To my teacher, S. N. Goenka (1924-2013), who lovingly taught me important things. ” Harari later said again at the end of the book, “Vipassana…has helped me to observe reality as it is, and to know the mind and the world better. I could not have written this book without the focus, peace and insight gained from practising Vipassana for fifteen years. ” He has also mentioned in numerous interviews that he does Vipassana twice a day for two hours and goes on a Vipassana retreat for 30-60 days per year usually in the winter. His books share really sharp and unique ideas about the human race, and were recommended by Barack Obama, Bill Gates, Mark Zuckerberg etc., so that got me more curious about Vipassana.

I was really shocked when I started to have all those direct experience with the reality and the truth during the meditation, but more to come after the course. One example, I had been wondering for a long time, why days are becoming shorter than when I was a kid. I always felt I never had enough time every day to do the things on my list. Now I become aware of the useless little things I do every day. I began to keep my life minimal and minus the trivial things I usually did. I also realized what are the things I need to focus, what are important to me and what are not. It’s even weird to say, that people around me seems happier and nicer; my parents are the most obvious.