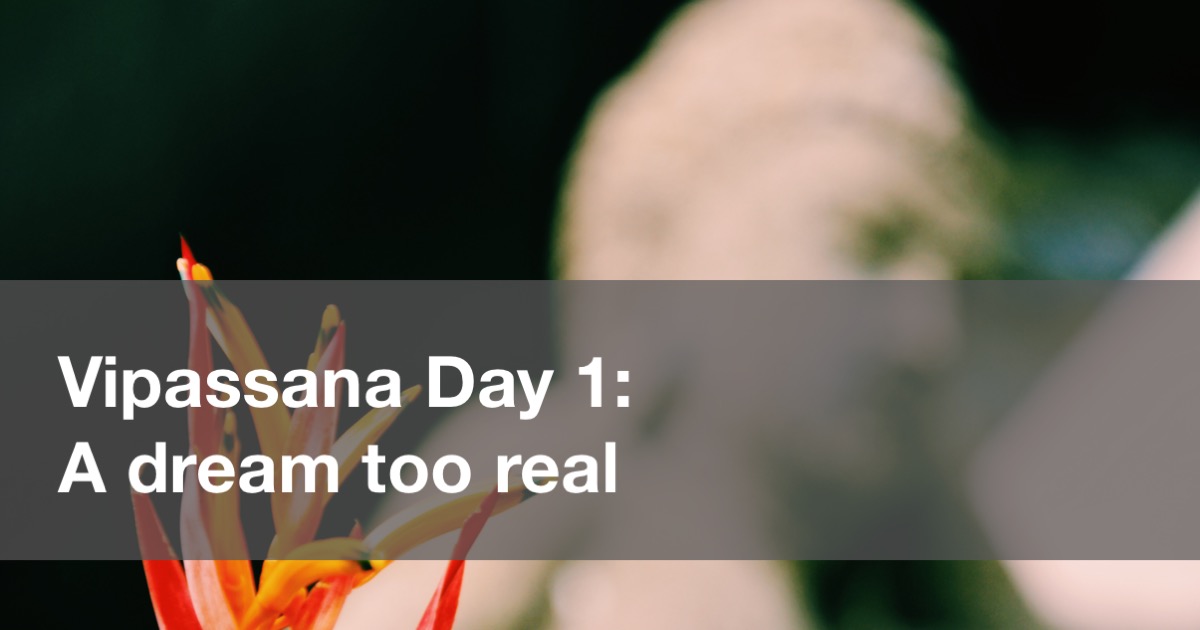 Vipassana Day 1: A dream too real

4 a.m. the Gong was striked. I woke up, a bit confusing. I just had a really real dream, not sure if it’s because of waking up too early. The dream appeared too real in the memory. I brushed my teeth and washed myself really quickly. The sky was still dark. Surroundings were perfectly peaceful. The first two hours passed by extremely slow – I was counting the second, or even the millisecond, having to change my position every other minute. Suddenly the speaker started to play Goenkaji’s chanting. I thought it’s gonna be over soon, but it’s actually only half way through.

While closing our eyes, I can feel that the surrounding started to get brighter. After the first session, the sky was completely bright. A server excitedly waved at me by the door of the dhamma hall – my slippers were found.

In the afternoon, I asked to change my seat to the back. I was quite happy in the beginning as, first I found my slippers, second I naively thought that I can lean on the wall when get tired during the meditation session. However, not only that I was wrong about leaning, but also I realized that the lady right next to me were burping and farting every minute. I could not focus at all. I tried my best to not to think about it at all, but the harder I tried, the more swaying my thoughts went with the sounds. I kept telling myself, “hiccup and farting are only temporary!” “when will it stop?” “will it go like this for the next ten days?” … I just could not stop thinking. We were asked to focus on our nostril area, but only 10% of the time I could notice that I was not focusing and I would come back to the nostrial area. I could not even stay focus on the instructions by Goenkaji from the speakers.

Finally it’s the tea break at 5 p.m., but only to find that there’s no tea, but powder drink that taste like Tang drink mix. Plus, there’s a kind of weird looking sugar that also tasted kinda salty. I didn’t know what it was, but I was hungry and it’s the only thing to eat at the moment. Where is the masala tea? FYI, the Joti center has the best masala tea I’ve ever had!

The discourse by S. N. Goenka starts at 7 p.m. every day. Surprisingly, he answered all the questions I had from the day. How could he know? Probably every student would have the same question on the first day? After the last meditation session of the day that finished at 9pm, we could ask the assistant teachers more questions. I asked about all sorts of weird reaction my body had during the day. But all questions lead to one answer: “observe yourself.” Whatever type of reaction/sensation it is, just observe yourself, not asking for a certain kind of phenomenon, just observe objectively.