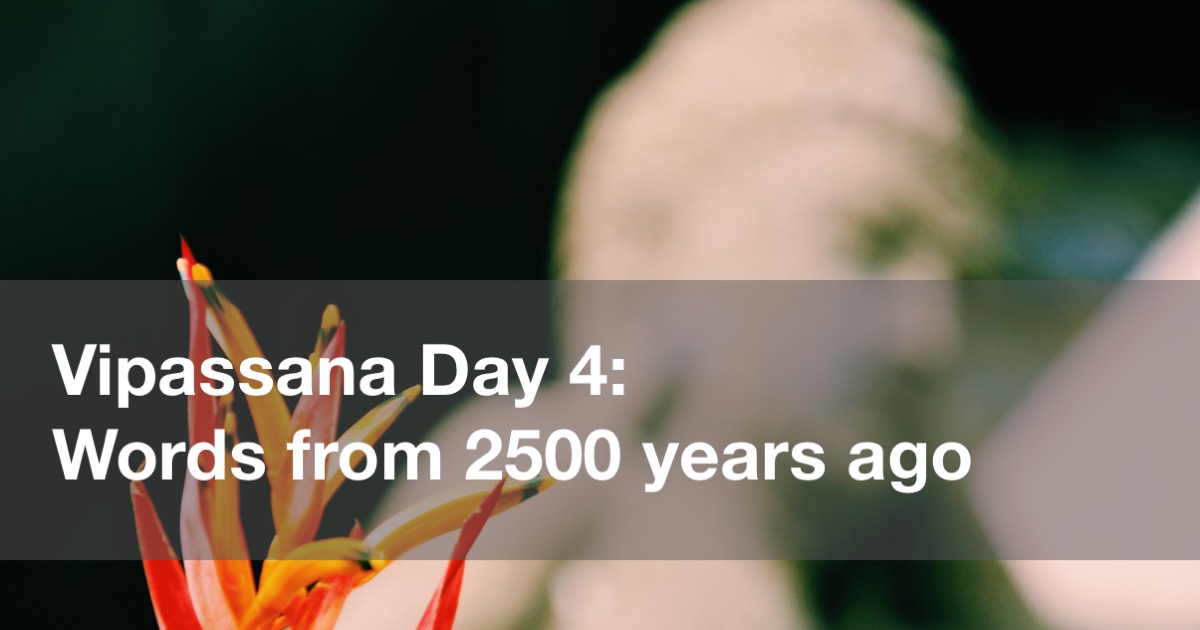 The first three day of the 10-day course is just the preparation for the actual Vipassana meditation, which is called Anapana. The fourth day is in fact the first day of Vipassana.

My mind started to wander and my body hurt again – and I was aware of that. I was used to focus all my attention in the nostril area, now I have to move the focus all around my body. I didn’t feel any sensation at all. That drove me crazy. I got restless. Why was it so hard to feel my own sensation? In the meantime, you’d get more sensitive, so all the pain and thoughts were ever more intense.

Most of the negative emotion and memories were now back, and intensified. It’s hot outside. I started to think again: what is all of this for? Now that there’s one more week left, I can still leave now and enjoy the following seven days on a sunny beach instead. But just like before, I knew I wanted to finish the course deep inside. All I can do now is to observe all these weird thoughts as an outsider.

I read a great book my first year of college, called “Diamond Sutra Explained.” I always thought I understood what was explained in the book. Many people around me said that I had been calmer since then. Only now I had discovered that I did not learn how to control my mind and emotion after reading the book. It was just on the surface, an illusion that I could appease myself. Because those philosophical explanations were only logically understood, but never became part of me. They were still outside. But for those who have practiced well and embrace the karma law as part of themselves, they can face all their emotions and dilemma directly, because their emotions are peaceful naturally, not like mine which was subjectively controlled.

After the evening tea break, I went back to the dorm and found out that my roommate had left already – all her stuff were gone. I was shocked. I was not ready to see this. We had not even talked a word since the retreat started. I did not know what she was thinking every day. She seemed well, and did not show any trace that she’d leave. But I remembered our conversation from the very beginning – it started to make sense. She was not really willing to be here to learn the meditation. She said she was going to visit her boyfriend in Burma and decided to stop by to try the Vipassana since it’s free anyway. Maybe she felt that four days should be enough for the experience. I confirmed with the server later that night. They encouraged me by saying that I should not worry – it is anything but relevant to me. I should focus on my practice.

Interestingly I felt a bit uneasy now that I was alone in the room, but more peaceful. I also realized that I may have gotten the best room of the entire center, it’s a corner room with windows on three sides in a relatively new buildin. When I first moved in, I didn’t like it at all thinking it was dirty and simple. I am now very grateful.

The Dhamma talk really moved me today. Goenkaji talked about the first words that the Buddha said when he was enlightened under a Bodhi tree. It was a full moon night:

Through countless births in the cycle of existence

I have run, in vain

Seeking the builder of this house; and again and again I faced the discomfort of new birth.

I thought about the people who had been chanting these beautiful lines for hundreds of generations. How lucky we were able to hear them. These lines were like being transmitted through a time machine by Goenkaji’s chanting, bringing us back to 2500 years ago…