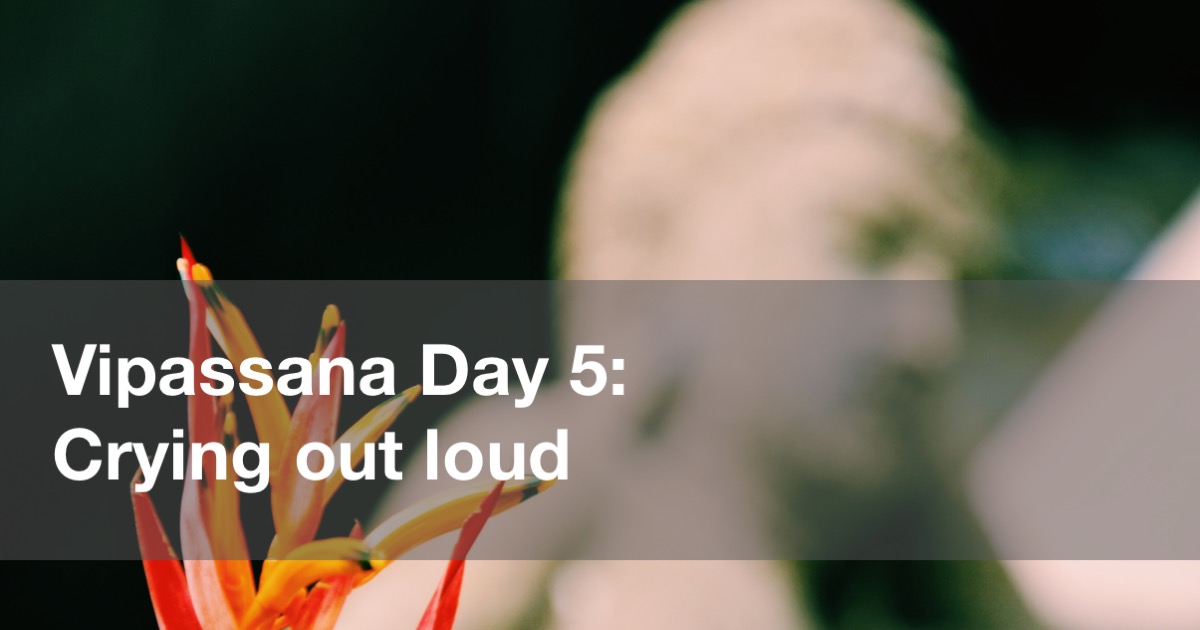 During the afternoon sitting, my knees and legs were hurting so badly. I’m forcing myself to not move – as the teacher told us. After the first session in the afternoon, I suddenly felt so upset.  There was no reason for it. I tried to think what was the origin that caused my sudden sadness, but I could not get a clue. I went back to the dorm during the five minute break. The sadness was getting stronger. I still don’t know why.

Five minutes was up, the gong stroke again. It was hard to move. Everyone else has left the dorm. I tried so hard to get up and leave. I was walking really slowly back to the Dhamma Hall, without even think about it – I was just walking slow naturally and did not realize that I was. My mind started to fill with the poor people and upsetting situations I had encountered. Maybe just 20 meters away from the Dhamma Hall, my sadness peaked. I could not help but cried out. I tried to keep it quiet, but I could not. And it only turned bigger.

Actually right before this sudden upsetting cry out, during the break after the lunch, I was translating for another student from China. She had to ask teacher about her unbearable crying the day before. The teacher said,

“if you want to cry, you should try to feel the sensation on your face as well. Find a quiet and peaceful place, cry out lout.”

At the time, I was thinking in my head: “why would people cry during a meditation sitting? That makes no sense. I would not cry anyways.”

I never liked to cry when I was a baby, and I almost never cry when I grow older. Nothing really gets me to cry. But ironically, it happened to me too soon.

Although teacher had said that we should try to feel the sensation on our face, but when you are crying so hard, you could not even think about it.

I don’t know since when I had cried so much like this. Maybe when I was a baby? In the beginning, I tried to control myself to not cry, or at least to cry not so hard and loud. But it was like freshets roaring down from the mountains, totally out of control. When I realized, I was already crying on the ground. Now the servers brought the chairs, but I could not move and stand up. I see ants and bugs moving around on the ground. I saw them so closely like never before. But I didn’t care any more. I just kept crying.

Why? I wondered why I cry? Maybe I was crying for all the sadness combined. Why so many sufferings in life? Why war? Why injustice? Why is human so weak and small that we can’t go against those sufferings? Why humans are so pathetic and apathetic at the same time? Why can’t I just forget about all those unsettling feelings and incidents?

I was shivering, and crying. I had no idea how much tears have poured down. Now the two kind teachers walked over to me. They asked if I wanted to chat. Yes, of course, please. But I could not stop crying and respond. Servers held me by the arm and walked me to the office. They prepared a cup of lemon water. When I started to slow down and quiet down, the teachers came in. They reminded me again, that I should be aware of the sensations on my face.

They smiled and said, “now you had cried out the grief that has been buried deep down. ”

I could not smile back. This very moment, I felt like I was a grain of sand, so small and weak. I thought about the whole universe. Our big wide planet earth is as well merely a grain of sand.

The two teachers carry the kindest Metta (sympathy). They were observing me with care, encouraging me that nothing matters, and everything is as transient as fleeting clouds. Only this present moment is the realest.

Thank Buddha I cried before arriving the Dhamma Hall. Because I was crying really loud and wild, and there were over a hundred of people sitting there.

After this unexpected incident, I began to be more deeply connected to equanimity, sympathy. I felt the sufferings of all beings and the greatness of the Buddha, not religiously; I am just simply and purely grateful for what he did after he became enlightened.

2500 years ago, the Buddha Sakyamuni sat under a Bodhi tree for eight days and nights. Finally on a full moon night, unlike many of his smaller enlightenments before, this time he got enlightened with the ultimate truth.  During the four decades since his enlightenment, he patiently taught his methods to millions of people, and the methods got passed down for thousands of years. It is Vipassana. Now, I am learning this method for the first time in Yangon, 2500 years later.

There’s nothing magical about it. You just observe yourself. That’s it. But it’s more powerful than any magic.

After I went back to my dorm for the break, a squirrel climbed up high on my door. I knocked the door, hoping it’d go away, but it did not. No matter how much sound and movement I made trying to scare it away, it did not even move a bit, and it was there for a long time. There was somehow a type of connection between us. It was sending a message to me. But I could not tell exactly what the message was. The language could not express it well, but the feelings did. I just felt the link deep down in the cosmos somewhere.

The gong stroke again. I had to go, but I was afraid that this little squirrel may get hurt if it fell from the door when I open it. A server came, and she threw out the squirrel.

Shanghaier from Braavos, based in Westworld, working for Axe Capital, nerdy as Sheldon. Born in Lothlórien 🧝‍♀️. Having taught a class at Hogwarts 🧙🏼‍♀️. Driving a millennium falcon II. Own a portal gun invented by Rick Sanchez. Raver on USS Enterprise (NCC-1701). Traveling often to andromeda. Never used Pied Piper. Valar morghulis. 🧘🏻‍♀️Meditator for life. Questing for the ultimate truth of time and space.