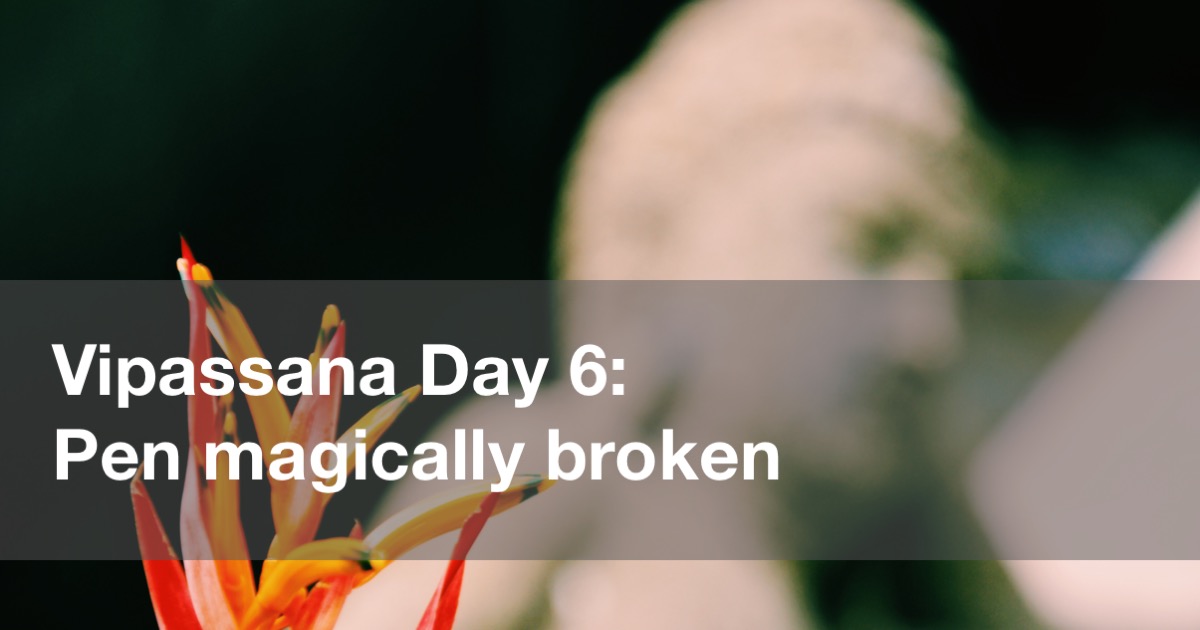 Today, a new sensation got in – I felt dizzy. Then my body started to hurt from head to toe. Weirdly, when you actually observe these pain carefully, you realize they are changing instantly – it’s different pain every little second it passed by. All the pains that feel the same are actually different – what a weird discovery!

Goenkaji said that the sixth day may be the hardest. The fourth and fifth day I was not feeling so painful as in the beginning, but today, I felt the pain getting stronger – maybe I got more sensitive? However, my will to stay and finish the course got stronger as well, and I don’t have a single thought of quitting any more.

When I came back to dorm during the noon break, another roommate next door started to cry out loud. I could not help but weeping as well. I was glad that I was alone in my room – no one saw or heard that. This time, I was calmer. I tried to feel the sensation on my face as the teacher told me so.

Then I had the thought again to quickly jot down some of the thoughts. I was hoping to write down everything in less than 60 seconds. I wanted to keep a record of such an unusual experience.

It’s when the magic happened. After I started writing and before I finished writing a simple word, I noticed that the ballpoint pen was broken. I have been using the same kind of pen since I was in elementary school – it’s quite durable – it had never broke no matter where I put it or how much I used it.

Now this ballpoint pen was broken – the ink leaked and the whole pen was covered in the blue oily ink. Now the ink was on my hand. This was too weird. Yes, one of the rules says that we cannot write during the 10-day retreat. Maybe the Buddha was trying to remind me not to break the commandment via this ballpoint pen: no one should ever break the rules.

At the daily Q&A time, I told the teacher about the ballpoint pen incident. The teacher laughed and said, “you already wrote anyways. You should forget about it. Just promise that you won’t write again before the class is over. “