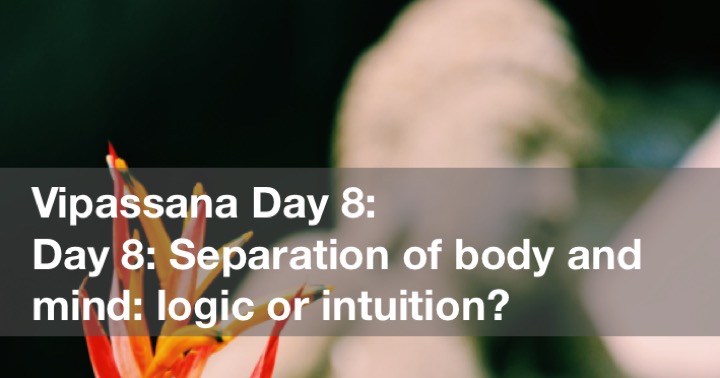 Vipassana Day 8: Separation of body and mind: logic or intuition?

I thought the gong has not struck yet when I woke up, so I stayed a bit longer in bed. But then I realized the sky just got brighter a bit too soon. I must have been late then. Generally, if you had not got up by the second time the gong stroke, the server would come and wake you up. But the server did not come at all so I had missed the beginning of the first session already. I cleaned up myself quickly and ran over to the Dhamma Hall. It had not been long since Goenkaji started his chanting from the recording. And I did not move a bit since I sat down, a huge improvement.

Then began the second session in the morning. Just towards the end of this session, I felt a sudden separation between my body and mind. I instantly knew that the mind and the body are two different parts – knowing is not a good word to describe it – it’s like you know within your body – the knowing is part of your body. You no longer know it, knowing itself is part of you.

Body is where the mind stays for the moment. “My” appearance is only temporary; it doesn’t belong to me forever. “I” began to observe myself from the outside. Am I me? Or do I exist only spiritually? Even the spiritual existence is temporary. It’s a bizarre other-worldly experience that I could never expect to fathom before. And it’s way beyond what language could describe.

I did not move either. The mind part of me had a tendency to leave my body, but I ended up not leaving. Then the gong striked. The 1.5 hr session felt just like 15 minutes. I just forgot to think about time.

Before, when I read philosophy book, I’d think, ok, I understand this, but I never thought that mere understanding was definitely not enough and far from being as part of oneself. If it is only understanding, it doesn’t change us from inside. The understanding is still outside, separated by the barrier of language.

“The Tao that can be said, is not the Tao itself.” – this is the first line in Laotzu’s Tao Te Ching. The indescribable meaning of it was so powerful now. I just had a refreshed experience on that line.

For a long time, our education has been focused on logic. But logic, unlike intuition, is not natural. We are not born with knowing logic. Logic is learned over time since the minute we were born, because our parents learned from their parents. Then we go to school, we learned more on how to think logically, especially by taking exams. If we are given this condition abc, then the answer will be xyz – on every exam paper. We are getting more and more used to logic, and we gradually have forgotten how to use our intuition. This is against our human nature. At the same time, it’s the inevitable after effect of the industrial revolution and our industrialized education.

I am not saying logic is useless. It’s very useful. Both logic and intuition are essential. The development of both is necessary. Intuition can solve a lot of the things that logic cannot, and vice versa. My point is that logic is overwriting our instinction as technology advances in our society. Steve Jobs said that he saw real intuition in India, “The people in the Indian countryside don’t use their intellect like we do, they use their intuition instead, and their intuition is far more developed than in the rest of the world. Intuition is a very powerful thing, more powerful than intellect, in my opinion. That’s had a big impact on my work.”