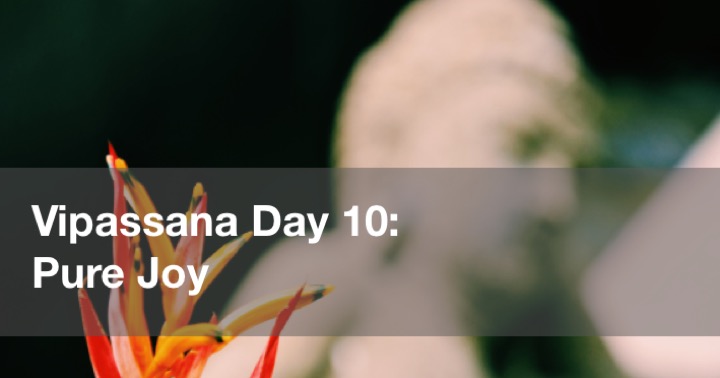 We could start talking to each other this morning at 11, for the first time since the meditation started ten days ago. We would also learn a new technique of meditation, Metta, the meditation of benevolence.

Tracing back to 10 days ago, I kept counting the days till the end of the retreat: why time was moving so slowly? But now, the course would be over too soon, and I think time was moving too fast.

It was the raining season in Burma. Every day it rained. In the first couple days, it’d rain for one or two hours in the afternoon, but most of the time it was sunny. Sometimes I’d expect it to rain more, because the weather was too hot. There was A/C in the Dhamma Hall, but there were often outages, so it felt better when the doors were opened and breeze was coming through (at our dorm it would even run out of water from time to time). Starting from the 8th day, it rained for longer in the afternoon, often into the night. On the morning of 10th day, it started raining before dawn, and it felt very cool.

Only two hours around noon time were dedicated to accept our donations. The rain stopped for a short while, and I went to the locker room to get some cash. Some students took out their phones, but then were told we could only started using our phones after 8pm tonight. Donations would not be accepted if one has not successfully completed the course.

Our daily schedule changed as well. The break after the lunch was longer. We would still have to meditate afterwards. Meditation became much easier after we started talking again. Of course I did not feel as focused as before.

Since we started talking, stories were being revealed.

Two Dutch girls met for the first time here though they came from the same town back in Holland. I met a Chinese-American girl who lived in Shanghai before; we have been to the same parties and have mutual friends, but we did not know each other until now. Students came from everywhere around the world. An American couple and a gay couple form Australia attended the retreat together and did not speak to their partners for the past 10 days.

There were also some monks and nuns. Monks wore dark maroon robes; they looked like they were local. Nuns wore light pink robes, and they looked like from elsewhere. I was curious, and I wanted to ask the nuns where they came from. But they kept looking down and seemed like to try avoiding eye contact with others, so I guess they hoped to not talk to anyone…

My next door were two girls from Yangon. They didn’t speak English well, but they were always smiling. Next to them was J, the girl from Malaysia who were on the same flight with me, and another girl, K, from Vietnam, both old students of Vipassana. It’s K’s fifth Vipassana meditation retreat. Both K and J are not religious, but believe that Vipassana has changed their lives.

K got a severe skin disease couple of years ago. It’s a type of virus infection which she got blisters all over her body. They were very itchy, but whenever she scratched them, the blisters would crack and weep, and infect more areas on skin. She went to see many doctors, but none could cure her. Then a friend recommended her to try Vipassana and gave her a contact of a Vipassana teacher. She visited the Vipassana teacher in Vietnam. According to K, the teacher gained ability of telepathy. Every time K had some questions and went to see the teacher, the teacher would know her questions in advance and answer those questions without K asking. Or the teacher would open his line with, “are you coming to see me for …?” And every time he was correct.

K said that on the fifth and sixth day of her first Vipassana retreat, the blisters on her arms started to scab. After finishing the first retreat, her skin stopped feeling itchy. She kept practicing at home, her skin recovered from the infection. She met many students who had similar experiences as her from her five Vipassana retreats. She was more convinced than ever to practice Vipassana continuously.

Of course, there were stories in opposite to K’s. A French girl, F, decided to leave on the 10th day, right before the course was over, because she said she really needed to go to a mental emergency room that her brain and mind could not function well. She bought the earliest flight back home that day to see a doctor – luckily she lived in Singapore – not a long flight.

I did not remember seeing this French girl, probably because I was always looking down in the past ten days. I only heard about her from others. This girl told some people that Vipassana is dangerous and has damaged her mind completely. She thought she’s gone crazy and needed immediate treatment. According to her roommate, the French girl did not obey the Dhamma rules since day one. She read books on various meditation methods every day while reading is strictly forbidden, not to even mention learning about other meditation methods during the retreat. On the 9th day, this French student could not fall asleep for the entire night. She moved to another room with a Chinese girl. The Chinese girl told me that F did not sleep at all.

After coming back home from the retreat, I did some research on this insomnia situation during Vipassana. It’s not uncommon. It was hard for me to fall asleep as well during the second half of the retreat. But I did not feel tired at all for having much less sleep. When I could not fall asleep, I just observed myself.

I asked the teacher about insomnia as well. The teacher half-jokingly said, “This is normal. And isn’t it better now for you? You can save quite a lot of sleeping time to do more other things.” When one is not anxious about themselves not being able to fall asleep while just observing the sensations, one’s body could still get enough energy and get recharged.

But Vipassana told us, we should not have this clinging obsession with sleep. If we could fall asleep easily, well, that’s great; if not, that doesn’t matter either. We should always be the moment, because all is impermanent – Anicca, Anicca.

After coming back to dorm, I chatted with K and J for hours. I was wide awake and could not fall asleep again after our long chat. I took out my phone and started to reply emails till around 2 a.m.